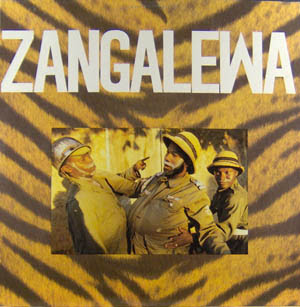 When “Waka Waka” from Shakira came out, I was ten. I heard the song several times a day; it was on the radio, on the television, and we danced on it with my friends. All the time.

One day, my uncle showed me another video on youtube, which I invite you to watch:

This is an extract from the music video of the composers and original interprets of “Zangalewa”: the formerly called “Golden Sounds”. The band, today dismantled, was formed by Guards of the Army, and the song is directly inspired by a troop chant sung by Cameroonian soldiers during World War II. The song became so popular throughout Cameroon – and later throughout the African continent and in some other places in the world -, that the group later changed its name to the title of the song itself: “Zangalewa”.

My reaction when I watched this video: Pride. The 10 years old me was proud that a song making even the shiest of my friends dance was part of the cultural heritage of my country.

Then, one day, I found this:

My reaction when I watched this video: “Hum… Excuse me?”. Was she casually saying that this whole song, which is clearly a cover of “Zangalewa”, just popped out of her head?

Was she talking about the creation of the verses only?

Whether she lied or not, the simple fact that she did not mention the origins of the song is a problem to me. And there is no place for arguing that she was inspired by one of the many covers of “Zangalewa”, since even the lyrics of the first verse of “Waka Waka” refer to a battle ground, suggesting a basic knowledge of the military background of the Cameroonian tune.

The band discovered Shakira’s version after its release. Thus she – and whoever was part of the creative process of “Waka Waka” – committed plagiarism. She did not respect the intellectual right of recognition which should be allowed to all artists and content creators. Quickly, voices on the internet rose, threatening the image of the popular singer. The band and Shakira went to court, and soon after they reached an out of court settlement. Is this how it is supposed to be? Are artists meant to go to court to have their rights respected?

What I find interesting is that Ze Bella, the former leader of the band, appears proud of Shakira’s remake in the interviews that he gave. “Zangalewa”, which was already quite popular and covered by various artists, was suddenly a major global hit, highlighting his own music. However, I wonder how many, out of the 2 billion viewers of “Waka Waka” YouTube video, are aware of where it comes from. Did you know?

And this is no lonely case. Other Cameroonian and African artists have faced the exact same issue of ‘borrowed songs’ without recognition, by popular American artists.

And while most of them came to an out of court settlement, admitting the intellectual rights of the copied ones, some of them only gained little from the unassumed plagiarisms. How much time will it take to recognize that intellectual rights are global? How long before African artists are recognized as rightful of respect as any artist of any continent or country?

I am hopeful for the future. With the rise of internet, plagiarism becomes increasingly harder. Virtual communities are quick to rise, and being accused of theft is no good publicity for anyone.

I will conclude by referring to the theme of our festival: RECLAIM. Reclaiming is everywhere. And there are many ways to do it. With this post, I advocate for the rising up of voices for the reclaiming of all rights, in all forms, for EVERYONE.

Please find my sources below.

And a huge big up to Manu Dibango who passed away almost a month ago due to Covid-19. We love you lion <3

For the pleasure of your soul and ears, here are the original versions (most from Cameroon!) of songs (or parts of songs) that you surely have heard before.

Note: I want to acknowledge the fact that indigenous artists from other lands have also struggled with this issue. I decided to focus on my roots for this article because I want to be as accurate as possible. But I invite you to make your own research about this; there are so many cases.

And a bonus one, which is not from Cameroon but from a South-African artist: Solomon Popoli Linda. And he was the author-composer of the very well-known “The Lion Sleeps Tonight”, covered by many and by Disney itself, without more recognition than a few pennies. He died in poverty.

Solomon Linda & The Evening~Mbube vs. millions of dollars

Around the World… Waka Waka Hey Hey! – WFMU’s Beware of the Blog